The labyrinth in Chartres Cathedral can be walked each Friday between the beginning of Lent and October 31 from approximately 10:00 am until 5:00. Check here for more information on the availability of the labyrinth for public walking.

General Orientation to the labyrinth in the cathedral

The Chartres labyrinth, created in the early thirteenth century, with a diameter of 12,88 meters, spans the entire nave of the cathedral. Its pathway, which begins in the west, winds back and forth without interruption for 261.5 meters before arriving in the center. Twelve circles, divided into four quadrants, form its pattern. Until 1792 there was a copper plaque in the center featuring either Theseus and the Minotaur, or the New Jerusalem. Unique design features of the Chartres labyrinth include the floral design in the center with its six petals and 113 rays that extend from the outer circle.

It is impossible to fully appreciate the Chartres labyrinth apart from its context within the cathedral. Symbolizing the unity of all creation, its placement between the third and fourth bays of the nave suggests a meeting of God and humanity. The cross that gives definition to the path is integral to the design. Related Christian theology and biblical stories surround the labyrinth in the medieval stained glass windows. Liturgies on Easter Evening were practiced on some french labyrinths from at least the end of the fourteenth century until the beginning of the sixteenth century. The Office de la Lumière on the labyrinth has taken place on the Chartres labyrinth since 2013. (See photo galleries from 2013 and 2015.) 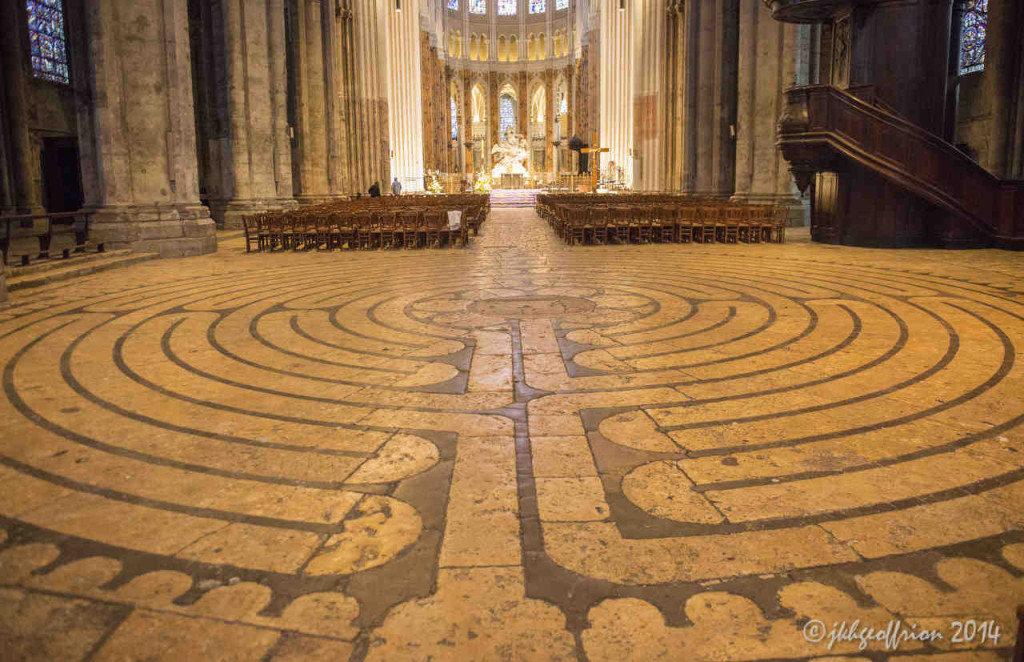 Two recommended books on the cathedral labyrinth: Praying the Labyrinth and Praying the Chartres Labyrinth, both written by Jill.

Also recommended: Is That A Fact? by Jeff and Kimberly Saward. If you only have time to read one article about the Chartres labyrinth, please read this one (and save yourself a lot of confusion and misinformation). 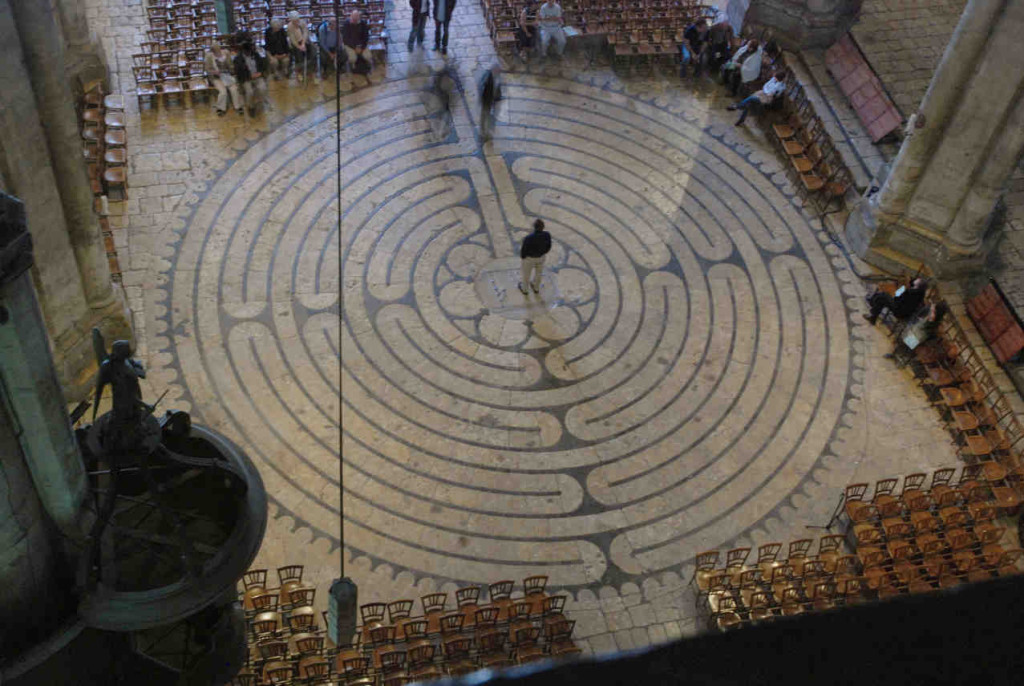 Walk on, pilgrims.
Walk on.
Towards not only the destination,
but beyond it
to the embodiment of your hopes.

Walk on, pilgrims.
Keep on
seeking
that which you cannot imagine,
yet anticipate.

Walk on, pilgrims.
Stay on
the path
that unfolds at your feet.
The fear that approaches
will pass by.

Walk on, pilgrims.
Sing on.
The songs that have nourished you
will offer encouragement
and peace.

Walk on, pilgrims.
Be on
the way.
Be with
The Way.

Other pages related to the Chartres labyrinth and labyrinth prayer on this site:

Mary and the Chartres Labyrinth

Labyrinth Walking at Chartres
If you haven’t walked a labyrinth before
Praying using the Chartres Labyrinth: Seven Suggested Steps
Journal page for you to use after a labyrinth walk
Une démarche du labyrinthe
Relecture personelle

Praying Near the Labyrinth
Finger labyrinth for your use