Jesus’ Passion and Resurrection is the subject of the twelfth century stained glass window found on the west wall in Chartres. It’s colors and imagery speak of the light of Christ that shines in our world. Praying with this window during Holy Week is particularly meaningful, but contemplation of this medieval art always yields much fruit.

To begin, it is helpful to face a window and take it in as whole. Notice its colors, shapes and structure. Resist analyzing. Think of this time as a handshake with the window, a connection, but only a first impression. Open your mind and heart to God. Ask to see what you most need to see.

Here is a brief description of the content of this window:

When reading medieval windows, one begins on the bottom (closest to the earth) and on the left (more profane than the right which was considered more sacred). 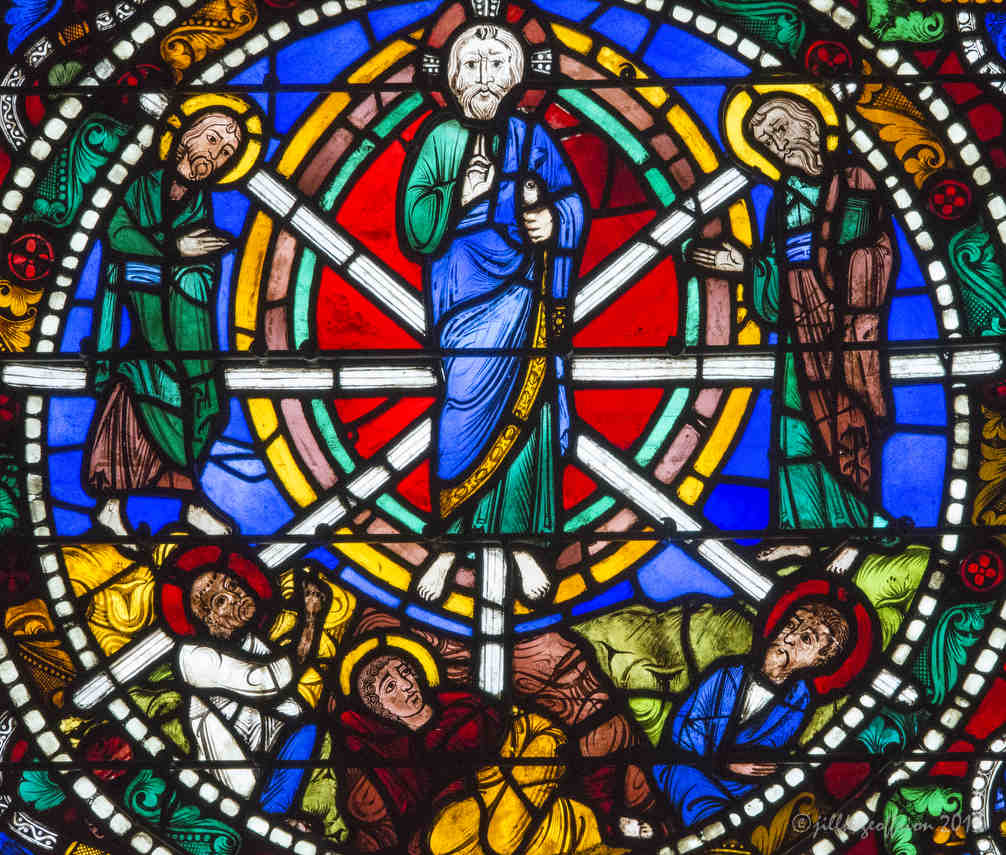 Now about eight days after these sayings Jesus took with him Peter and John and James and went up on the mountain to pray. And while he was praying, the appearance of his face changed, and his clothes became dazzling white. Suddenly they saw two men, Moses and Elijah, talking to him. They appeared in glory and were speaking of his departure, which he was about to accomplish at Jerusalem. Now Peter and his companions were weighed down with sleep; but since they had stayed awake, they saw his glory and the two men who stood with him. Just as they were leaving him, Peter said to Jesus, “Master, it is good for us to be here; let us make three dwellings, one for you, one for Moses, and one for Elijah”—not knowing what he said. While he was saying this, a cloud came and overshadowed them; and they were terrified as they entered the cloud. Then from the cloud came a voice that said, “This is my Son, my Chosen; listen to him!” When the voice had spoken, Jesus was found alone. And they kept silent and in those days told no one any of the things they had seen. Luke 9:28-36

Prayer: Holy Jesus, Your story draws me deeper into God’s grace. Here, surrounded by grace, I wait for your guidance, joy, healing, and hope. 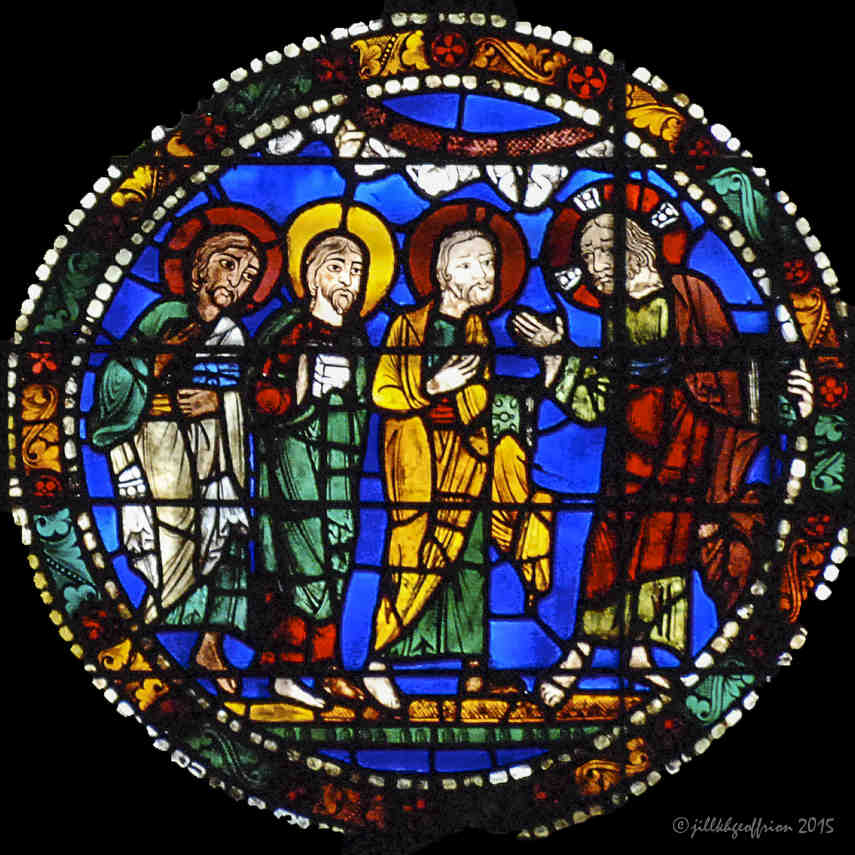 While Jesus was going up to Jerusalem, he took the twelve disciples aside by themselves, and said to them on the way, “See, we are going up to Jerusalem, and the Son of Man will be handed over to the chief priests and scribes, and they will condemn him to death; then they will hand him over to the Gentiles to be mocked and flogged and crucified, and on the third day he will be raised.” Matthew 17:19

Prayer: Jesus, I’m on the way with you…and I am listening…speak to me… Help me to serve you. Help me to hear what you are saying. 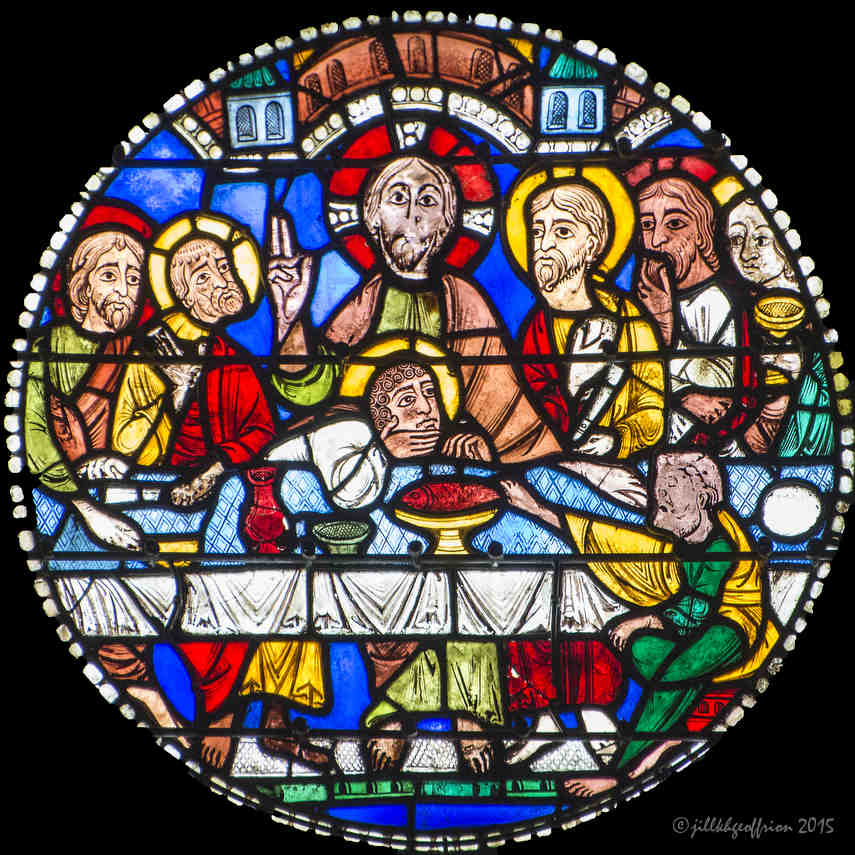 When it was evening, Jesus took his place with the twelve; and while they were eating, he said, “Truly I tell you, one of you will betray me.” And they became greatly distressed and began to say to him one after another, “Surely not I, Lord?” He answered, “The one who has dipped his hand into the bowl with me will betray me. The Son of Man goes as it is written of him, but woe to that one by whom the Son of Man is betrayed! It would have been better for that one not to have been born.” Judas, who betrayed him, said, “Surely not I, Rabbi?” He replied, “You have said so.”

While they were eating, Jesus took a loaf of bread, and after blessing it he broke it, gave it to the disciples, and said, “Take, eat; this is my body.” Then he took a cup, and after giving thanks he gave it to them, saying, “Drink from it, all of you; for this is my blood of the covenant, which is poured out for many for the forgiveness of sins. I tell you, I will never again drink of this fruit of the vine until that day when I drink it new with you in my Father’s kingdom.” Matthew 26:20-30

Prayer: God, do you exist inside a circle? Am I inside of that circle with you? Can I rest on Your lap? And when what you say is disturbing to me, are you really that unflappable? (I know you are.) I am grateful that I can be with you just as I am. Thank you for that level of acceptance and love. 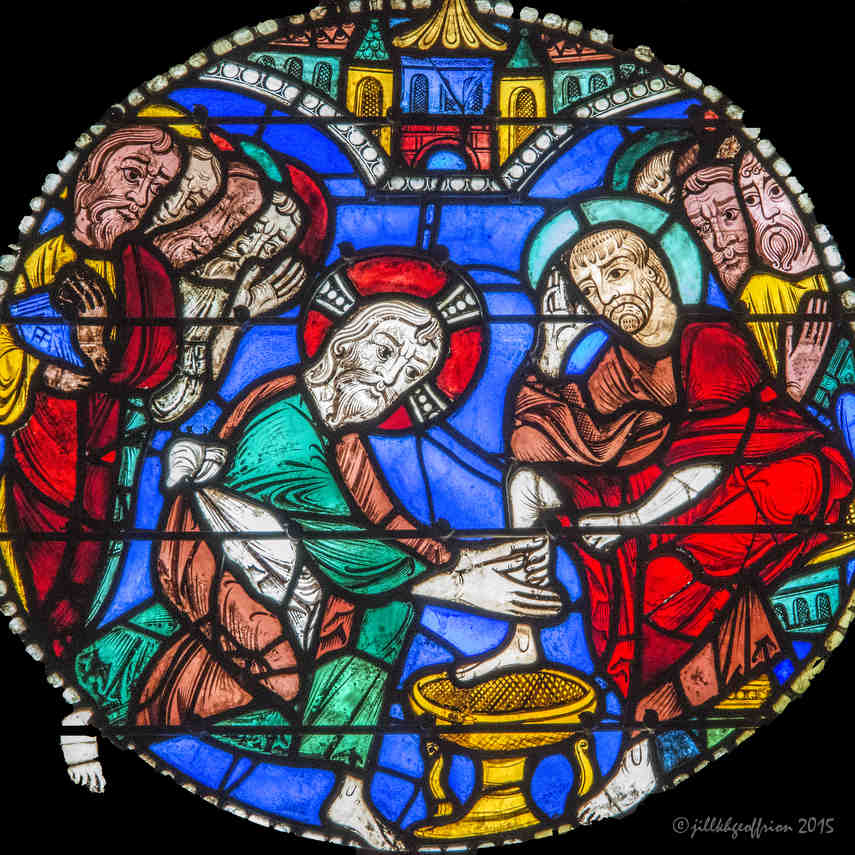 Jesus, knowing that the Father had given all things into his hands and that he had come from God and was going to God, got up from the table, took off his outer robe, and tied a towel around himself. Then he poured water into a basin and began to wash the disciples’ feet and to wipe them with the towel that was tied around him. He came to Simon Peter, who said to him, “Lord, are you going to wash my feet?” Jesus answered, “You do not know now what I am doing, but later you will understand.” Peter said to him, “You will never wash my feet.” Jesus answered, “Unless I wash you, you have no share with me.” Simon Peter said to him, “Lord, not my feet only but also my hands and my head!” Jesus said to him, “One who has bathed does not need to wash, except for the feet, but is entirely clean. And you are clean, though not all of you.” For he knew who was to betray him; for this reason, he said, “Not all of you are clean.”

After he had washed their feet, had put on his robe, and had returned to the table, he said to them, “Do you know what I have done to you? You call me Teacher and Lord—and you are right, for that is what I am. So if I, your Lord and Teacher, have washed your feet, you also ought to wash one another’s feet. For I have set you an example, that you also should do as I have done to you. John 13:3-15

Prayer: Jesus, O Jesus, Washer of Feet, Server of your friends, Lover of our bodies and souls. Let me know you in these ways, I pray. 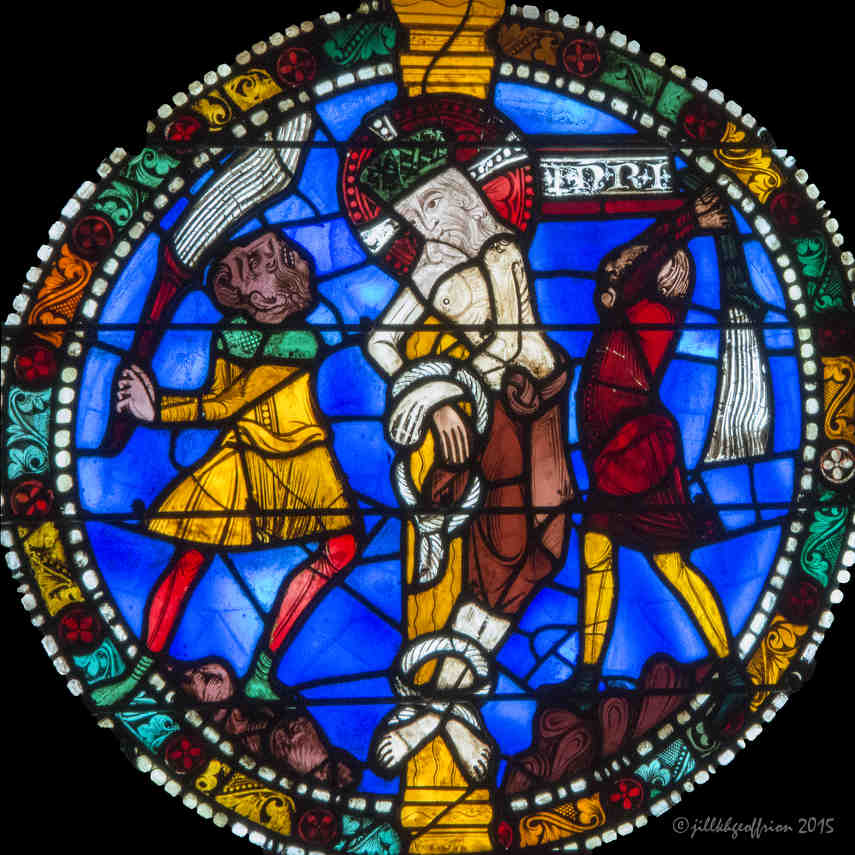