Chartres Cathedral was constructed to honor God, offer support to Christ’s followers, house Mary’s relic, and to foreshadow the Heavenly Jerusalem. The cathedral was built to both inspire and teach, communicating who God is and who we are in light of who God is. The language used is architecture based on an understanding of ratio and proportion. No study is necessary, human bodies seem to “get it” naturally, although the more you learn, the more you will appreciate both the simplicity and complexity of the building and its ability to support those who come.

A brief introduction for pilgrims (pdf)

Let the cathedral introduce itself as you walk around the outside

Meet the cathedral as you go inside

Orientation for Pilgrims to the Chartres Cathedral: a brief introduction with questions for reflection (pdf) 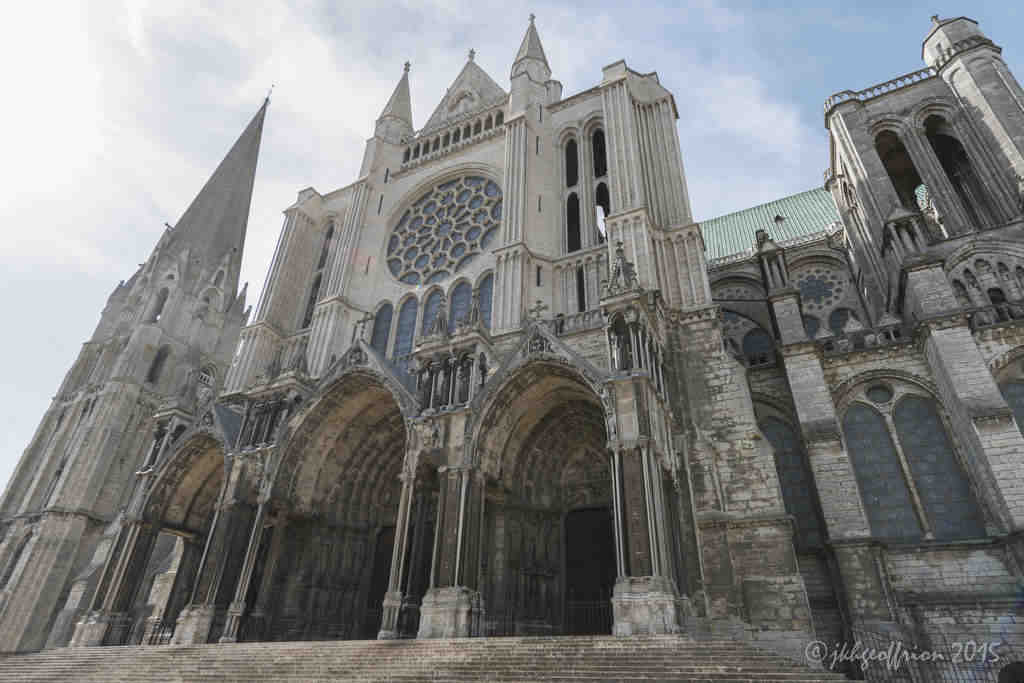 Some of the Central Themes Present in the Cathedral

The medieval mind saw God everywhere. The world-view of the constructors of the cathedral imagined the sacredness of all things. It is therefore possible to find almost anything in the imagery in the cathedral. I have given tours on biblical stories, but also suicide images, the birds of the cathedral (you can identify specific birds), dream images, and even namesake images (e.g. Daniel, Elizabeth, etc.) One can identify several major foci of the imagery here, including:

The Love of God: It is expressed throughout the cathedral through image, liturgy, and architecture.

Mary as a disciple of Jesus: Mary, the mother of Jesus and the Church is seldom depicted alone in Chartres. Her role as explained through image is to direct our attention to her son, Jesus. There are more than one hundred images of Mary with Jesus at Chartres in stone and glass, to mention all the others adorning liturgical items that span many centuries. Marian symbols such a little shirts (representing the veil of Mary), the burning bush, or stylized Ms greet the pilgrim at every turn.

Birth and Spiritual Rebirth: The principal cathedral relic is the Veil of Mary, believed to have been worn either at the annunciation of Jesus’ birth to Mary or at his actual birth. Birth images and symbols that point to birth are found throughout the cathedral (perhaps even including the number of stones found in the labyrinth). Care for those who have been birthed are very present as well, including images such as Mary being bathed after her birth and Jesus being breastfed.

Pilgrimage: This cathedral, built after the fire of 1194 and at least the fifth to stand on this site, was constructed with pilgrims in mind. Throughout the ages, many pilgrims have come to Chartres to pray with the veil of Mary, one of the most important relics in Christendom. Chartres is on the Chemin de Saint Jacques, The Camino pilgrimage route to Compostela in Spain; there are many images of St. James here that serve to encourage pilgrims on their journeys. The architecture of the crypt as well as the upper church take into account the needs of pilgrims as well, having ample room for processions, services, and prayer. 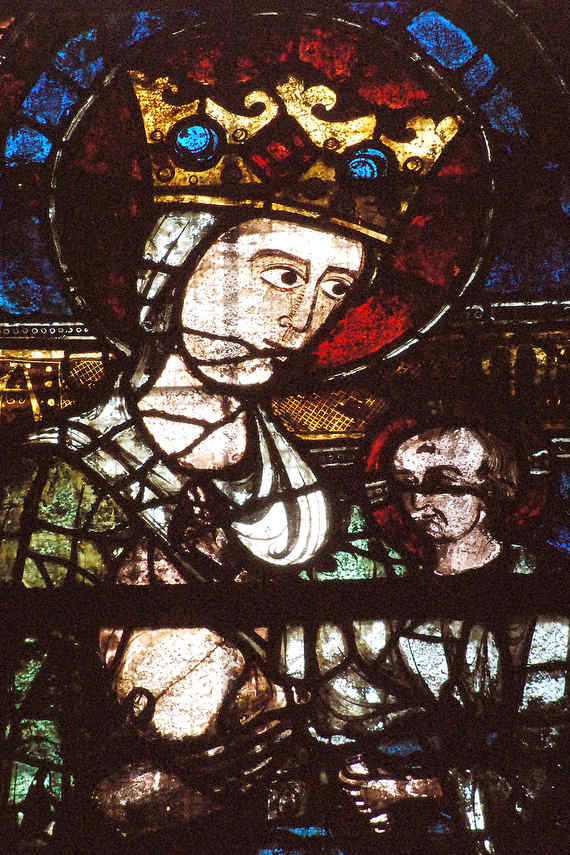 Mary offering her breast to Jesus, Clerestory window in the south nave.

Scriptures That Orient A Pilgrim (NRSV)

Therefore, since we are surrounded by so great a cloud of witnesses, let us also lay aside every weight and the sin that clings so closely, and let us run with perseverance the race that is set before us, looking to Jesus the pioneer and perfecter of our faith, who for the sake of the joy that was set before him endured the cross, disregarding its shame, and has taken his seat at the right hand of the throne of God. Hebrews 12:1-2

Questions That Every Pilgrim Needs To Ask

What is God communicating to me through the cathedral?

How is God using this place to transform my faith and life?

The Biblical Reference to the New Jerusalem (foreshadowed by the cathedral)

And I saw the holy city, the new Jerusalem, coming down out of heaven from God, prepared as a bride adorned for her husband.  3 And I heard a loud voice from the throne saying, “See, the home of God is among mortals. He will dwell with them as their God;  they will be his peoples, and God himself will be with them; God will wipe every tear from their eyes. Death will be no more, mourning and crying and pain will be no more, for the first things have passed away.”

And the one who was seated on the throne said, “See, I am making all things new.”

Then one of the seven angels … came and said to me, “Come, I will show you the bride, the wife of the Lamb.” And in the spirit, he carried me away to a great, high mountain and showed me the holy city Jerusalem coming down out of heaven from God. It has the glory of God and a radiance like a very rare jewel, like jasper, clear as crystal. It has a great, high wall with twelve gates, and at the gates, twelve angels, and on the gates are inscribed the names of the twelve tribes of the Israelites; on the east three gates, on the north three gates, on the south three gates, and on the west three gates. And the wall of the city has twelve foundations, and on them are the twelve names of the twelve apostles of the Lamb.

The angel who talked to me had a measuring rod of gold to measure the city and its gates and walls. The city lies foursquare, its length the same as its width; and he measured the city with his rod, fifteen hundred miles; its length and width and height are equal. He also measured its wall, one hundred forty-four cubits by human measurement, which the angel was using. The wall is built of jasper, while the city is pure gold, clear as glass. The foundations of the wall of the city are adorned with every jewel; the first was jasper, the second sapphire, the third agate, the fourth emerald, the fifth onyx, the sixth carnelian, the seventh chrysolite, the eighth beryl, the ninth topaz, the tenth chrysoprase, the eleventh jacinth, the twelfth amethyst. And the twelve gates are twelve pearls, each of the gates is a single pearl, and the street of the city is pure gold, transparent as glass. 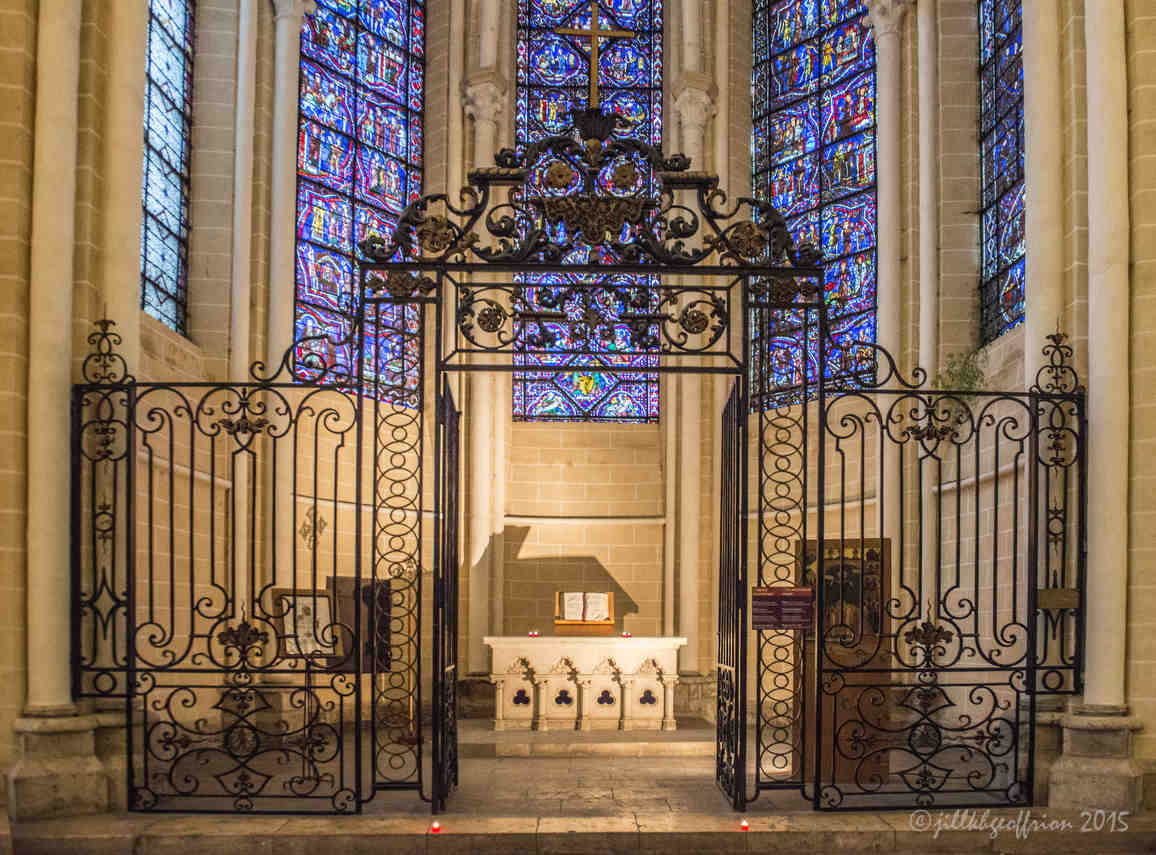 Ecumenical Chapel in the south ambulatory