Home +Mary +The Veil of Mary

Description of the Veil

The Veil of Mary (Sancta Camisa)  is an oblong piece of silk that Mary is reported to have worn during the Annunciation of Jesus’ birth by the angel Gabriel, and/or during her labor and delivery of Jesus.

History of the Veil

King Charles the Bald gave the veil to the Chartres Cathedral in 876. His grandfather, Charlemagne, had received it as a gift from the Byzantine Empress Irene. When tested in the twentieth century, the cloth contained pollen from first-century Palestine. This piece of cloth is closely tied to the history of both Chartres Cathedral and the town of Chartres. 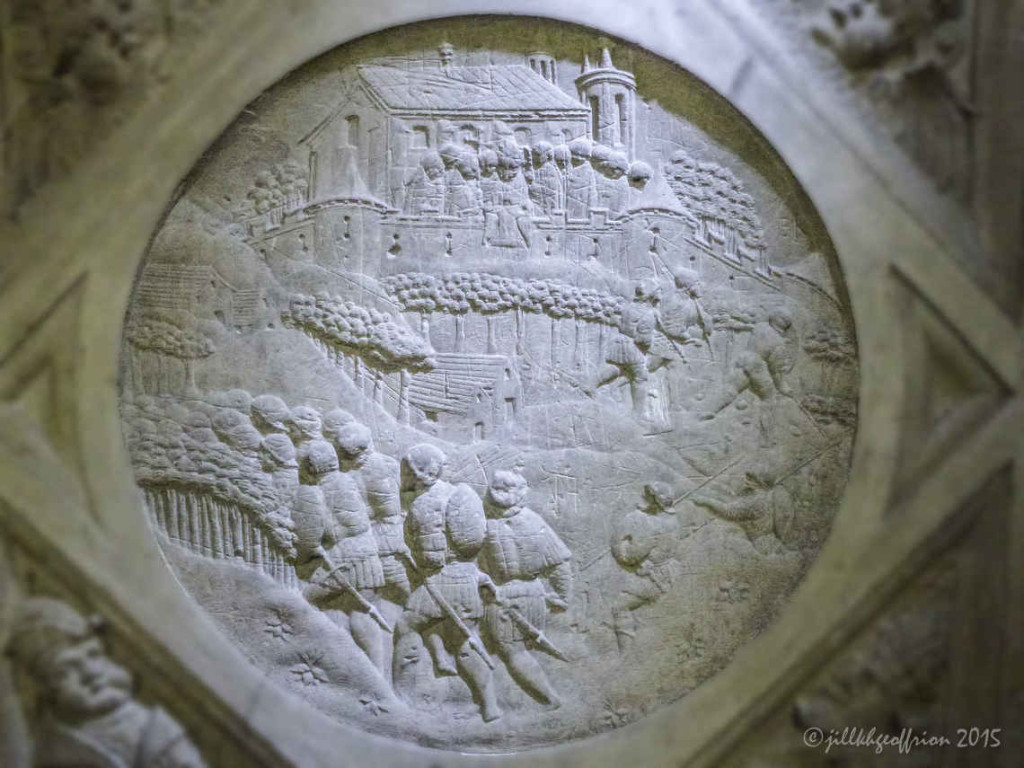 Mary’s Veil being exposed over the ramparts by Bishop Guillaume in 911. Medallion of the outer south ambulatory of the choir.

In “The Veil of Notre Dame” Yves Delaporte explains, “It was during the siege of Chartres by the Normands in 911 that the relic acquired its notoriety and entered into history.” (3) “The bishop, in view of the combatants, displayed on the top of the Porte-Neuve the tunic of the Virgin Mary. When they saw the venerated relic, the courage of the Christian armies doubled, while the pagans were terrified… Everyone attributed the victory to the diving help and intercession of the Virgin Mary. (5)

Mary’s Veil was placed with other relics in a reliquary around 1,000 CE. This was a sealed wooden trunk that was covered with gold. It was usually on the high altar in the East. People believed that the veil was some type of a shirt. Pilgrims came to pray near the veil. Since it was thought to offer a type of divine protection, shirts of those going to war, and later shirts offered to the Queens of France when they were about to give birth, were placed against its reliquary. They were then worn or kept by those seeking safety.

When much of the cathedral was severely damaged by fire in 1194, there was great fear that the veil had been destroyed. Malcolm Miller explains, “The tragedy is narrated in Les Miracles de Notre-Dame de Chartres, a mid-13th-century translation by Jehan le Marchant of an earlier Latin text. At first, the chronicler writes, the people despaired because they believed that the precious relic had also burnt and therefore that Mary’s protection of the city was lost, but on the third day… a procession appeared with the relic safe, having apparently been taken by priests into the Carolingian crypt beneath the choir. The cardinal then declared that this was a sign from Mary that she desired a more magnificent church, and great enthusiasm was immediately aroused for the reconstruction.” (Miller, 12.)

In the seventeenth century, the reliquary was opened. Inside there was an ornamented outer cloth (now on display in the Town Museum in the Bishop’s Garden) that protected another piece of cloth, “…very fine and with a very old look, out of silk. This did not have any decoration or color. It was damaged by humidity/moisture and old age in certain spots.” Delaporte, 14.

Michel Bouttier describes what happened later, “During the Revolution, the reliquary was destroyed. However, the veil, cut in several pieces, was conserved by several people who gave it back in 1809 and 1819.” (La Cathédrale de Chartres: Sa Construction. Paris: MB Editions, 1999, page 26) 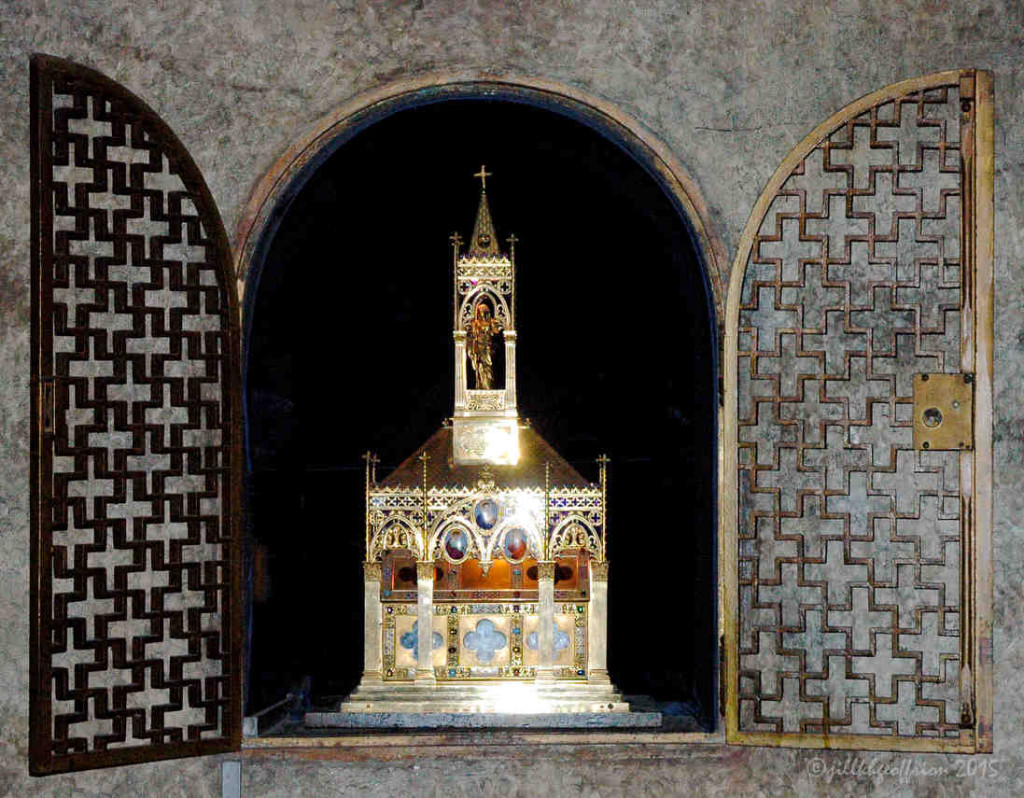 During the French Revolution, the veil was cut into pieces. Some were later returned to the cathedral. Today, two of these pieces are displayed. The larger piece, enclosed in a nineteenth-century reliquary, is found in a chapel on the north side of the choir ambulatory. A smaller piece is on display in the chapel of Notre Dame Sous-Terre in the crypt. 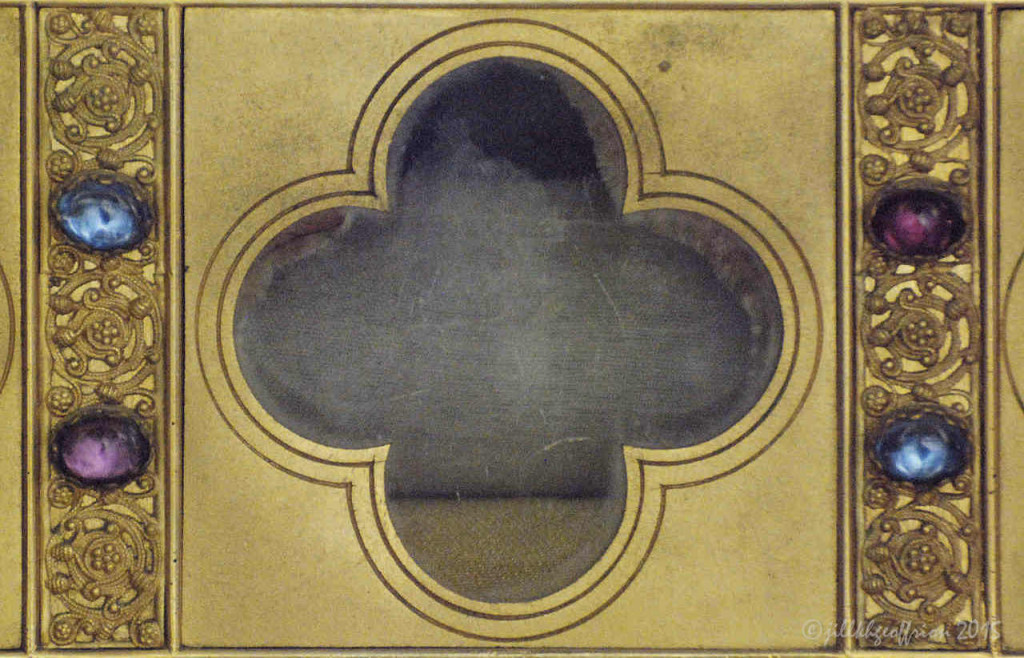 Prayer and the Veil

While relics were not something I grew up with, and while as a Protestant most of my knowledge about Mary came from annual readings of the Christmas passages, the idea of being close to something that might have touched Jesus captured my imagination. Praying near the veil has taken on great meaning to me. Some of my most meaningful times of prayers for my family have happened while sitting on one of the chairs in front of the Veil Chapel. When in the cathedral, I hope you will seek out the “Veil of Mary” with an open mind and heart. If you do, you will be joining the throngs of the pilgrims who have come to Chartres before you.

While praying near the veil in the Chapelle Au Cœur de Marie (previously the Martyrs’ Chapel), you may wish to:

Bibliography on the Veil: 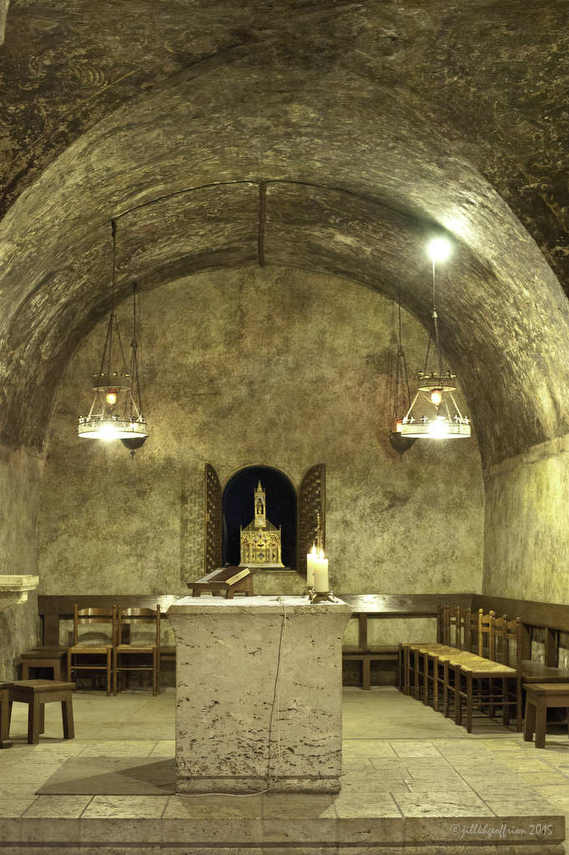 Veil reliquary in the chapel of Notre-Dame Sous-Terre

5 thoughts on “The Veil of Mary”