Continue to contemplate and pray with the Passion and Resurrection Window 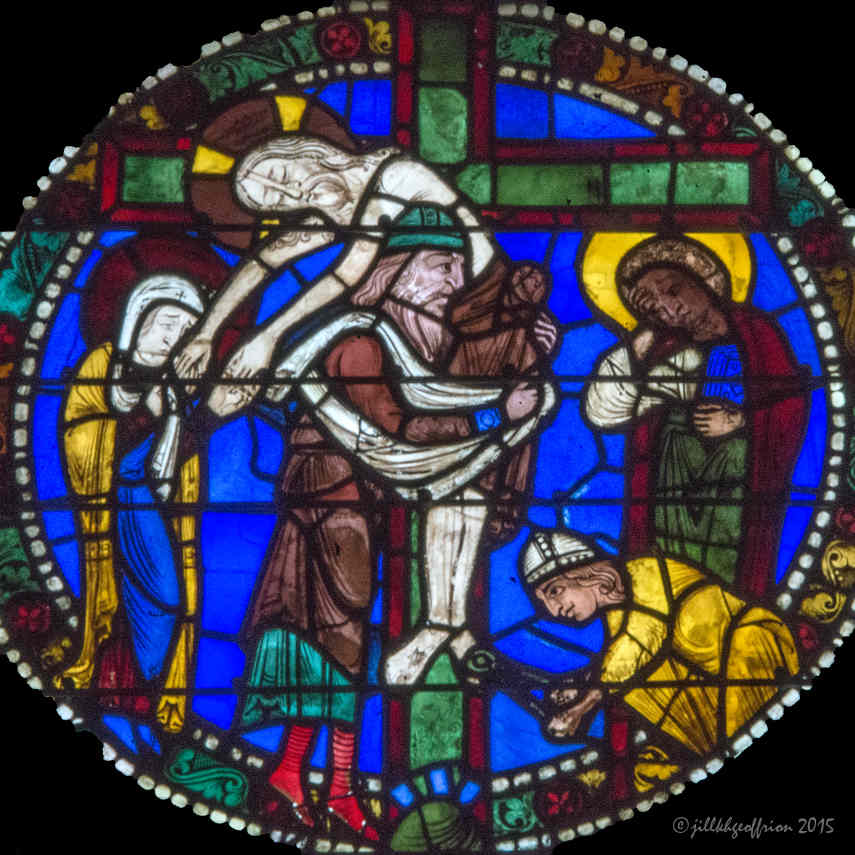 When evening had come, and since it was the day of Preparation, that is, the day before the sabbath, Joseph of Arimathea, a respected member of the council, who was also himself waiting expectantly for the kingdom of God, went boldly to Pilate and asked for the body of Jesus. Then Pilate wondered if he were already dead; and summoning the centurion, he asked him whether he had been dead for some time. When he learned from the centurion that he was dead, he granted the body to Joseph. Then Joseph bought a linen cloth, and taking down the body, wrapped it in the linen cloth… Mark 15:42-46

Mary holding Jesus hand as he is taken off the cross 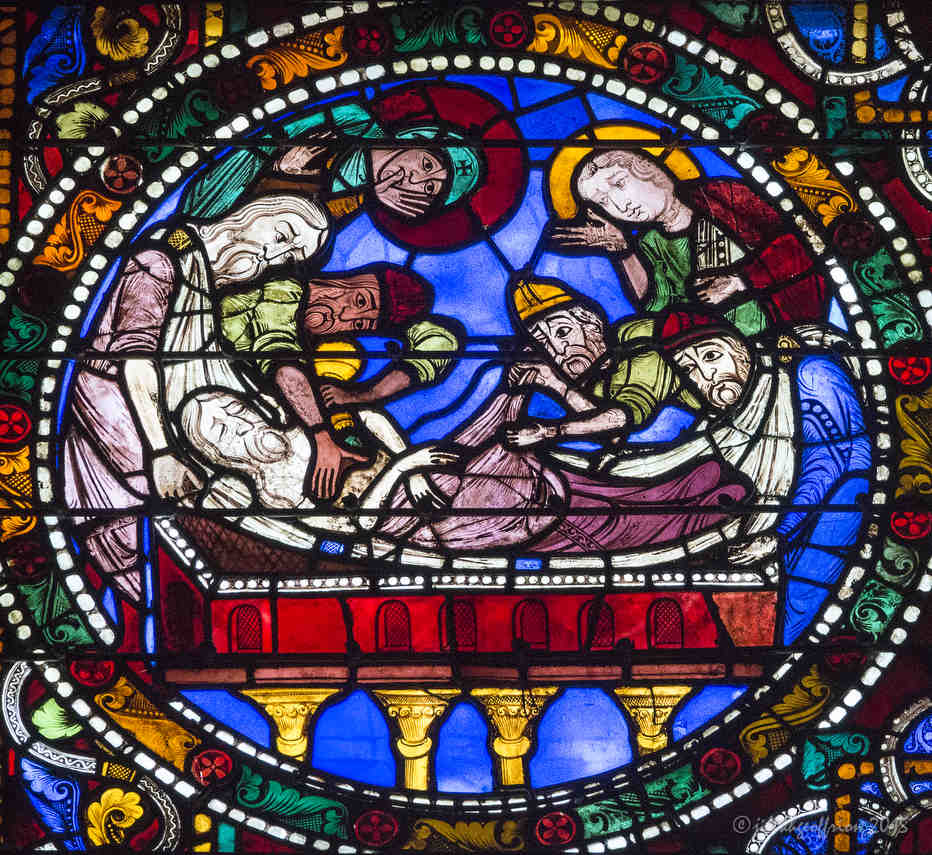 Mary watching as Jesus’s body is placed in a tomb

Prayer: I see Mary’s two hands held with palms pushing back the reality that is imposing itself. Open hands, but hands that close the mouth from speaking. Present, but sad. Open, but guarded. Unsure. Sometimes this is the only way to be with You.

On the first day of the week, at early dawn, they came to the tomb, taking the spices that they had prepared. They found the stone rolled away from the tomb, but when they went in, they did not find the body. While they were perplexed about this, suddenly two men in dazzling clothes stood beside them. The women were terrified and bowed their faces to the ground, but the men said to them, “Why do you look for the living among the dead? He is not here, but has risen. Remember how he told you, while he was still in Galilee, that the Son of Man must be handed over to sinners, and be crucified, and on the third day rise again.” Then they remembered his words, and returning from the tomb, they told all this to the eleven and to all the rest. Now it was Mary Magdalene, Joanna, Mary the mother of James, and the other women with them who told this to the apostles. Luke 24:1-10

Prayer: God Who Seems Not to Be There, Where are You? Not where we expect You to be! Your unpredictability startles us every time—shakes us to the core, is hard to understand. Sometimes one of your messengers explains it to us. Sometimes we just have to wonder and keep doing what we know to do. Help me, help us, to understand.

Mary Magdalene went out and told those who had been with him, while they were mourning and weeping. But when they heard that he was alive and had been seen by her, they would not believe it. Mark 16:10

Prayer: God, sometimes people don’t believe us—but it is because they can’t let in the bigness of Reality. Help me to stay focused on what I need to do and say and detach from the responses that I get. Help me to tell Your Truth—to myself and to others.

Mary stood weeping outside the tomb. As she wept, she bent over to look into the tomb; and she saw two angels in white, sitting where the body of Jesus had been lying, one at the head and the other at the feet. They said to her, “Woman, why are you weeping?” She said to them, “They have taken away my Lord, and I do not know where they have laid him.” When she had said this, she turned around and saw Jesus standing there, but she did not know that it was Jesus. 15 Jesus said to her, “Woman, why are you weeping? Whom are you looking for?” Supposing him to be the gardener, she said to him, “Sir, if you have carried him away, tell me where you have laid him, and I will take him away.” Jesus said to her, “Mary!” She turned and said to him in Hebrew, “Rabbouni!” (which means Teacher). Jesus said to her, “Do not hold on to me, because I have not yet ascended to the Father. But go to my brothers and say to them, ‘I am ascending to my Father and your Father, to my God and your God.’” John 20:11-17

Prayer: Jesus, my Jesus, I want to take hold of your feet. To hold You. To hold ONTO You. You want to bless me—by letting me make the connection to you, to hold your feet, your precious feet, but also to send me on…to do Your work in the world. Help me let go of my will and to follow and live out Yours.

Now on that same day two of them were going to a village called Emmaus, about seven miles from Jerusalem, and talking with each other about all these things that had happened.  15 While they were talking and discussing, Jesus himself came near and went with them, but their eyes were kept from recognizing him. And he said to them, “What are you discussing with each other while you walk along?” They stood still, looking sad. Then one of them, whose name was Cleopas, answered him, “Are you the only stranger in Jerusalem who does not know the things that have taken place there in these days?” He asked them, “What things?” They replied, “The things about Jesus of Nazareth, who was a prophet mighty in deed and word before God and all the people, and how our chief priests and leaders handed him over to be condemned to death and crucified him. But we had hoped that he was the one to redeem Israel. Yes, and besides all this, it is now the third day since these things took place. Moreover, some women of our group astounded us. They were at the tomb early this morning, and when they did not find his body there, they came back and told us that they had indeed seen a vision of angels who said that he was alive. Some of those who were with us went to the tomb and found it just as the women had said; but they did not see him.” Then he said to them, “Oh, how foolish you are, and how slow of heart to believe all that the prophets have declared! Was it not necessary that the Messiah should suffer these things and then enter into his glory?” Then beginning with Moses and all the prophets, he interpreted to them the things about himself in all the scriptures. Luke 24:13-27

Where is God? (Part 1) Jesus and the Disciples on the Road to Emmaus

Prayer: Jesus, I am trusting that it is you with me, walking with me, asking me the questions that will open the way to deeper understanding. Maranatha!

As they came near the village to which they were going, he walked ahead as if he were going on. But they urged him strongly, saying, “Stay with us, because it is almost evening and the day is now nearly over.” So he went in to stay with them.

When he was at the table with them, he took bread, blessed and broke it, and gave it to them.  31 Then their eyes were opened, and they recognized him; and he vanished from their sight.

They said to each other, “Were not our hearts burning within us while he was talking to us on the road, while he was opening the scriptures to us?” That same hour they got up and returned to Jerusalem; and they found the eleven and their companions gathered together. They were saying, “The Lord has risen indeed, and he has appeared to Simon!” Then they told what had happened on the road, and how he had been made known to them in the breaking of the bread. Luke 24:28-35

Where is God? (Part 2) Jesus eating with the two disciples at Emmaus

Prayer: God, I pray for my heart to burn within me. To recognize You with me. For this grace, I pray.