“The doors closed behind me, and I stood in a different world. Not that of Jesus and Mary, nor that into which I was born; but a world between them, whose faith was more certainty than belief, a world which aspired simply and tremendously, which hungered for Heaven, and which states its soaring thoughts in immutable glass and stone for the centuries to savor.”
Kenneth MacLeish. “Legacy from the Age of Faith,” National Geographic 136, no. 6 (December 1969): 856-82; quote from page 868. 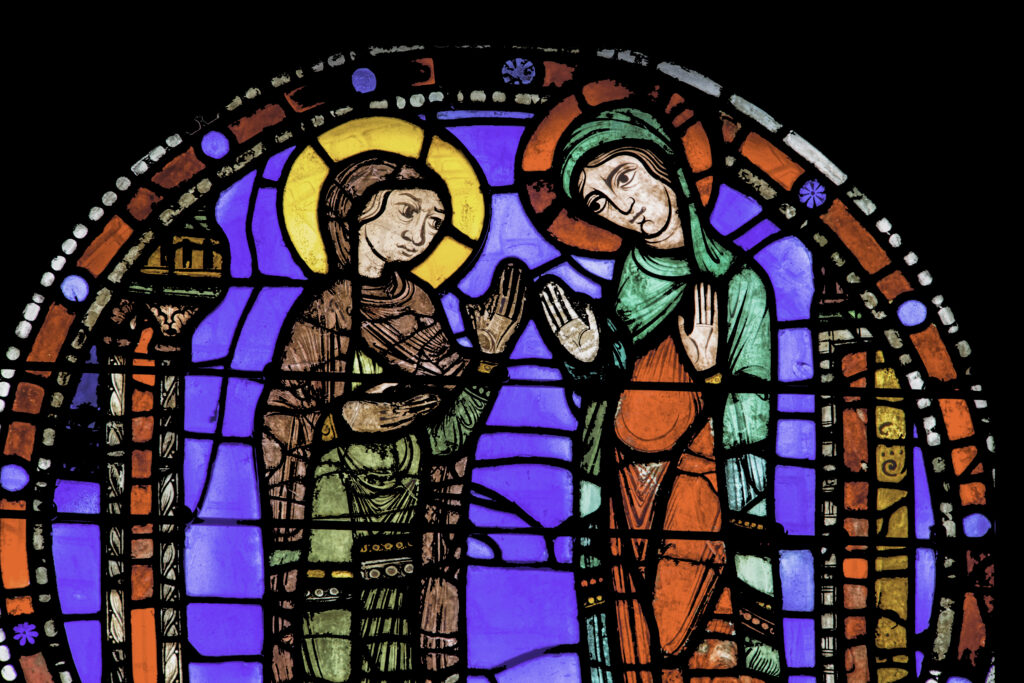 Key dates for understanding the cathedral

343: Mention of Bishop Adventus, a church was built after this time. It was burned down by Hunaud, Duke of Aquitaine.
751: Reference was made to “gifts to the church of our Lady at Chartres.” This was an unusually early dedication of a church to Mary in the West.
8th Century: Gallo-Roman cathedral was destroyed by the Merovingians during the wars of King Dagobert.
858: Cathedral destroyed by invading Danish Vikings led by Hastings. Bishop Gislebert begins reconstruction.
876: The Veil of the Virgin given to Chartres by Charles the Bald, grandson of Charlemagne, who had received it from Empress Irene in Constantinople and taken it to Aix.
962: Cathedral destroyed by fire during the war between Richard, the Duke of Normandy, and Thibaut the Liar, Count of Chartres. It was partially rebuilt.
990-1028: Fulbert arrives, is consecrated as bishop (1006) and witnessed the burning of the cathedral in 1020.
1020: Construction began on the crypt of Fulbert; longest in France, created to accommodate the throngs of pilgrims coming to the cathedral. Vaulted in 1024.
1134: Fire at Chartres, Rebuilding of the western towers begins with the north tower and then the south tower in 1142.
1037: Consecration of the Romanesque Cathedral that had a wooden roof.
1145: Building of the western Royal Portal begun.
1194: Fire that demolished the previous cathedral, leaving only the towers, the cathedral relic, and four twelfth-century stained glass windows.
1194-1220: Building of the current cathedral. The high vaults were erected around 1220.
1260: Dedication of the cathedral by King Louis IX.
1323: Saint Piat Chapter House and Chapel construction begin. Finished in 1358.
1417: Vendôme Chapel built. Finished in 1420.
1506: North spire destroyed by fire. 1507-1514: North tower steeple built by Jehan de Beauce using the flamboyant gothic style.
1508: Notre Dame du Pilier (statue) given by Astin de Geurerets.
1514: Construction of the sculptures surrounding the choir begun. Completion in 1715.
1594: Coronation of King Henry IV at Chartres.
1712: The reliquary with the cathedral relic (Veil of the Virgin) was opened for the first time since 1,000.
1767: Complete “renovation” of the Choir by Victor Louis (architect) in a neo-classic style (after the destruction of the original rood screen in 1763).
1773: Installation of the Bridan sculpture of the Assumption of Mary in the choir.
1790: Crypt closed due to the French Revolution.
1793: The Sainte-Châsse with the relic was taken apart, the veil was cut in pieces. Notre-Dame Sous-Terre (statue) was destroyed in front of the west doors. The Cult of Reason was inaugurated in the Cathedral.
1836: Fire that destroyed the original wooden roof, The Forest. It was replaced by a metal framework covered in copper.
1860: The crypt was reopened. The new “Notre-Dame Sous-Terre” statue was installed in the Crypt and blessed in 1857.
1918 and 1939 All stained glass was taken out for safekeeping during the wars. It was replaced for good in 1948.
1979: Inscribed as a UNESCO World Heritage Site. 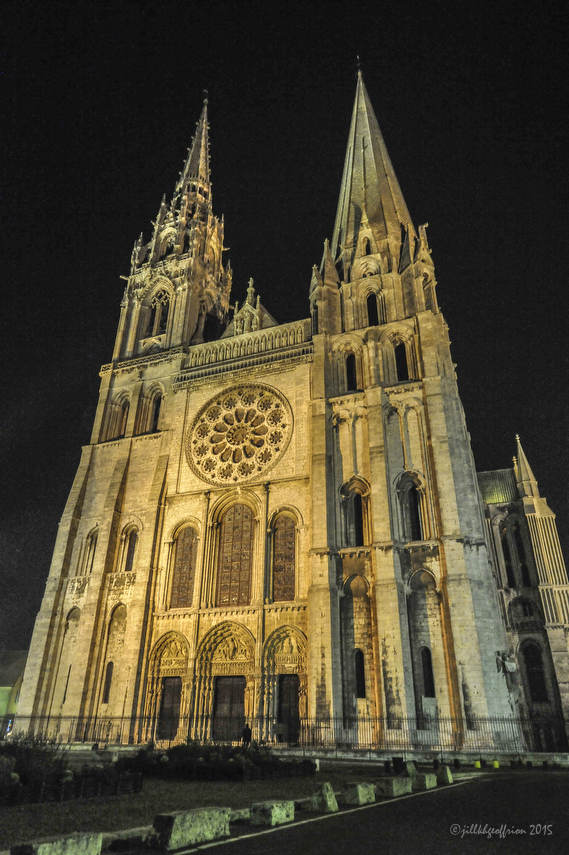 Key numbers that help to understand the cathedral

172 stained glass windows from the twelfth and thirteenth centuries (the most complete collection of medieval stained glass in the world). They cover a total of 2,600 square meters (27,986.167 square feet).

7,500: the approximate number of sculptures found at Chartres

Measurements and the cathedral

Size: The body of the final cathedral has a ground area of 117,058 square feet 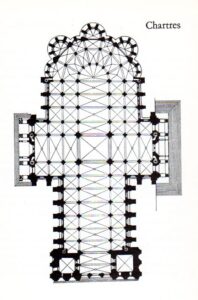 Orientation and the cathedral

Christian buildings, including Chartres, are oriented to reflect the theology that gives meaning to faith

East: The place of the rising sun and the Rising Son, Resurrection
The apse of the cathedral is oriented to the east.

What makes the cathedral “Gothic”?

Gothic architecture is known for its search for light. This necessitated new building techniques, like flying buttresses, to shore up the walls and thus allow more height for windows that allowed more light to enter the buildings. 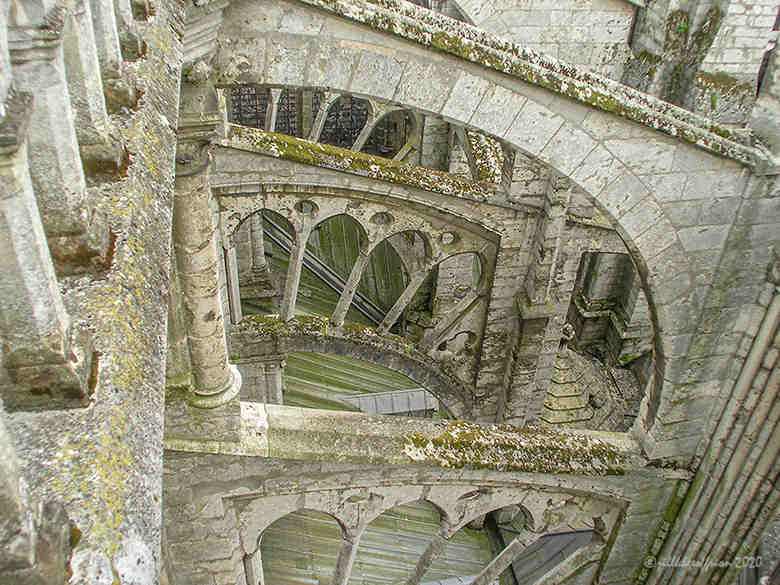 Gothic architecture also used pointed (rather than rounded) arches and ribbed vaults (as seen in the photo at the top of the page).

Special features of the Chartres Cathedral

The cathedral relic: The Veil of the Virgin Mary

The thirteenth-century (1201-1220) labyrinth spans the entire width of the nave between the third and fourth bays. It is one of the few medieval labyrinths that was never removed.

The School of Chartres: A famous and influential cathedral school that reached the height of its importance in the eleventh and twelfth centuries. Famous educators include Bernard of Chartres, Fulbert, Thierry of Charters, William of Conches, and John of Salisbury. It was based on the seven liberal arts (the trivium: study of logic, grammar and rhetoric, and the quadrivium: arithmetic, geometry, music, and astronomy.)